The tie-up between Scorpio Tankers and Dubai fund outfit Legatum could provide a new model for cash-starved shipowners. 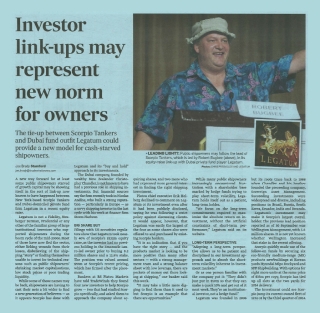 A new way forward for at least some public shipowners starved of growth capital may be showing itself in the sort of link-up now known to have happened between New York-based Scorpio Tankers and Dubai-domiciled private fund firm Legatum in a recent equity raise.

Legatum is not a Fidelity, Neuberger Berman, Prudential or any other of the familiar group of large institutional investors who supported shipowners during the boom cycle of the mid-2000s. Most of those have now fled the sector, either licking wounds from their losses, disbelieving of the shipping "story" or finding themselves unable to invest for technical reasons such as public shipowners' shrinking market capitalisations, low stock prices or poor trading liquidity.

While some of those names may be back, shipowners are having to cast their nets a bit wider to find a new generation of believers — as it appears Scorpio has done with Legatum and its “buy and hold” approach to its investments.

The Dubai company, founded by wealthy New Zealander Christopher Chandler, is not known to have had a previous role in shipping investments. But financial sources say the firm recently took in Nicolas Andine, who built a strong reputation — particularly in Europe — as a savvy shipping investor in the last cycle with his work at finance firm Storm Harbour.

Filings with US securities regulators show that Legatum took nearly 40% of Scorpio’s $132m equity raise, as the investor had no previous holding in the Emanuele Lauro-led owner prior to buying 8.2 million shares and a 12.8% stake. The position was valued around $55m at Scorpio’s recent pricing, which has firmed after the placement.

Bankers at RS Platou Markets have told TradeWinds they found four new investors to help Scorpio grow — two that had studied Scorpio specifically, and asked them to approach the company about acquiring shares, and two more who had expressed more general interest in finding the right shipping investment.

Platou chief executive Erik Helberg declined to comment on Legatum or its investment even after it had been publicly disclosed, saying he was following a strict policy against discussing clients. It would appear, however, that Legatum was easily the largest of the four as some shares also were offered to and purchased by existing Scorpio holders.

“It is an indication that if you have the right story — and the products market is looking to be more positive than many other sectors — with a strong management team and a strong balance sheet with low leverage, there are pockets of money out there looking at shipping,” one banker said this week.

“It may take a little more digging to find them than it used to but Scorpio is an example that there are opportunities.”

While many public shipowners increasingly encountered frustration with a shareholder base marked by hedge funds trying to play short-term volatility, Legatum holds itself out as a patient, long-term holder.

“We focus on the long-term commitments required to maximise the absolute return on investment, without the artificial constraints of short-term performance,” Legatum said on its website.

“Adopting a long-term perspective allows us to be patient and disciplined in our investment approach and to absorb the short-term volatility inherent in investment markets.”

Or as one person familiar with the company put it: “They didn’t just put in $50m so that they can make a quick 10% and get out of it next week. They’re an institutional investor, not a hedge fund.”

Legatum was founded in 2006 but its roots trace back to 1986 when Chandler and his brother founded the preceeding company, Sovereign Asset Management. Succeeding investments were widespread and diverse, including positions in Brazil, Russia, South Korea, Ecuador, India and Rwanda.

Legatum’s investment may make it Scorpio’s largest overall holder. The previous lead position reported as of 30 September was Wellington Management, with 5.8 million shares. It is not yet known whether Wellington increased that stake in the recent offering.

Scorpio quickly made use of the follow-on funds by securing six eco-friendly medium-range (MR) products newbuildings at Korean yards Hyundai Mipo Dockyard and SPP Shipbuilding. With options for eight more units at the same price of $33m per copy, Scorpio has tied up all slots at the two yards for 2014 delivery.

The investment could see Scorpio jump its current owned fleet of 12 to 31 by the third quarter of 2014.